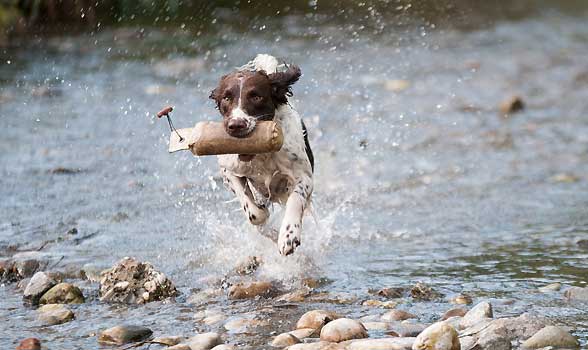 Dogs are naturally curious as well as protective of their owners. In order to keep your dog safe as well as to protect the safety of others around the dog, you should train him to do what you say in a variety of situations. Fortunately, teaching a dog basic commands is not difficult.

Sitting is one of the most basic commands dogs learn. Many dogs are trained to sit on command as puppies, but you can also train an older dog to sit. Once he has learned this command, your dog will sit down when you tell him rather than chasing people, cars, cats or anything else you don’t want him to chase.

To teach a dog to sit, get one of his favorite treats and hold it above his head. Tell him clearly and firmly, “Sit!” and gently push his behind down into a sitting position, then give him the treat. Don’t allow your dog to jump up to get the treat.

Practice this command in short, 10 to 15 minute sessions for best results. Always pet the dog as well as giving him a treat when he sits on command so that he will associate obedience with rewards.

Once your dog has mastered sitting, it’s important for him to learn to lie down when you tell him to. In order to learn the down command, your dog must accept you as leader of the pack, as lying down makes him more vulnerable. This command stops your dog from jumping on small children or acting in other undesirable ways while in public.

To train your dog using this command, start by telling him to sit. Once he is sitting, lavish him with attention as usual. Then, take a dog treat and move it down so that he naturally lies down in order to get the treat. Praise your dog when he is lying down. Once your dog has mastered lying down when you move the treat down, begin saying, “Down!” in a firm voice right before moving the treat down so that your dog will associate the command with the action.

Once your dog understands “down,” have him practice staying down despite distractions. Throw a ball near him and praise him if he stays down, or take him for walks in public places and practice the down command. Always praise your dog when he does what you ask so that he will learn to listen to your command.

Once your dog knows “sit” and “down,” it’s time to teach him to “stay” when asked. This is an important command because you don’t want your dog following you into traffic or into a busy store. Stay is also useful for stopping your dog from coming up to strangers such as small children.

Teaching your dog to stay is a little more complicated because it requires him to learn not to follow you when he hears your command and to wait for a new command before moving. Start by using one of the commands he’s already learned and praising him and rewarding him if he stays in a sitting or lying down position for a couple of seconds. Gradually increase the time he has to stay in order to get the treat. When he is staying for a reasonable period of time, introduce the word “stay” and reward him for staying in position after you say the command.

Finally, teach your dog a release command such as, “Come” or “Okay” by using this command when he gets up after staying for a minute or two and rewarding him.

These three basic commands are important to your dog’s development. Once he learns these commands, you can teach him all sorts of tricks if you wish, but first he should learn to sit, lie down and stay so that you can keep him safe.

How To Train Your Show Dog For Dog Shows

We humans have always been close with dogs and breeding them for ages. Thus, dog…

Stopping Your Puppy From Biting When puppies bite, they think they're just playing, but for…

10 Best Tips To Train Your Puppy